2014’s Titanfall got a lot of things right, as far as I’m concerned. The gameplay was fast, nuanced, and well-balanced, the level design was decent, and the action itself was varied and enticing enough to bring me back time and again. Unfortunately, it didn’t have this effect on many, and the multiplayer game became nearly barren withing a few months of release. That said, Titanfall still managed to retain enough of a following to warrant a sequel, and I sure am glad it did. Titanfall 2 improves on essentially every aspect of the original by speeding up the gameplay even more, making traversal more instinctive, improving the campaign tenfold, deepening the customization, and, most importantly, adding a grappling hook.

The central conceit of Titanfall 2 is the same as the original — fast-paced, traversal-oriented multiplayer gameplay heightened by the presence of powerful, massive robots used to turn the tide of a battle in your favor. The multiplayer this time around continues to impress, and feels great, aside from connection issues. There are quite a few different game modes, and lots of different ways to customize your pilot and your titan to fit your exact play style. Additionally, unlocking the myriad of different weapons and bonus items to outfit your character is quick but still feels like earning something. Each weapon is unique, and using a particular weapon more and more will unlock even further customization for that individual weapon, with addons like faster reload, quicker weapon switching, and different scopes. The weapons themselves vary greatly, from sniper rifles to grenade launchers to pistols to SMGs, and there are also weapons specifically oriented to taking down titans. Unlike the first game, however, you’re not limited to simply using one weapon against titans and one against pilots, with no useful overlap in between. Anti-titan weapons can be used for general crowd control or against the AI minions present in some game modes, and players can opt out of using one entirely and go instead for a pistol.

The pilot gameplay feels a lot smoother thanks to the addition of a few more customizable slots on the pilot loadout. In addition to the sprint boost and cloaking device from the first game, Titanfall 2 adds a grappling hook and a “phase shift” ability reminiscent of Tracer’s Recall ability in Overwatch, among a few other things. Pilots can now also place turrets and sonar detectors, call in more powerful weapons, and jam other player’s minimaps. The intensity of the pilot v. pilot dynamic is heightened thanks to faster movement speed, smarter level design to increase the necessity for quick traversal with Titanfall 2’s great parkour/wallrunning system, and different types of grenades to choose from, ranging from fire-spewing shurikens to remote-detonate satchel charges to bombs that coat an area in electric smoke. Pilot interactions are quick and painful, and often split-second decisions need to be made due to the level of pure brutality here. Pilots will quickly destroy each other with blazing weapons, and unsuspecting players can be taken out in one hit with a melee attack. 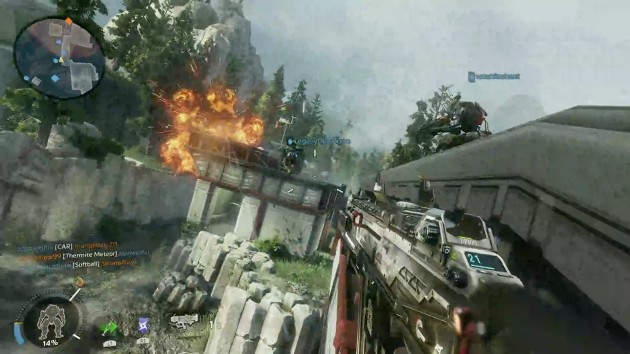 The titan system is equally revamped. There are more types of titans with various loadouts and abilities here, and yet again there is further customization to be had. Flamethrower-armed Scorch and minigun-wielding Legion act as tanks that excel at defending points, while the VTOL-enabled Northstar and sniper-like Tone can take down other titans quickly and brutally. The basic Ion titan acts as an all-around asset to the team, and the melee-oriented Ronin is a skillful assassin for finishing off both titans and pilots alike. They haven’t made the titans any bigger, but this added layer of customization and uniqueness really helps the titans to stand out as powerhouses on the battlefield, and can be incredibly imposing to pilots, only needing one well-placed melee attack or stomp to squash them. That said, the pilot v. titan gameplay dynamic has changed in favor of the pilot. The anti-titan weapons are more varied and distinctly more powerful, and the “rodeo” mechanic wherein a pilot can hop on the back of an enemy titan and ruin their day has been amped up as well. In the first game, it was a fairly rudimentary system of jump on, shoot them until they get wise, jump off, repeat. In Titanfall 2, every titan has a battery on its back that a pilot can pull out after a few seconds and deal minor damage to the enemy titan. After doing so, the pilot can hop off and give a friendly titan that battery to boost their shields. After the battery hole is exposed, a pilot can jump on again and drop a grenade inside the enemy titan itself, dealing much more significant damage. The titans in turn have more defense against this attack, all of which increases the need for teamwork and communication.

While there are several multiplayer game modes, there are really only two worth playing: Amped Hardpoint and Attrition. Attrition is a basic deathmatch with the addition of several kinds of AI mooks of varying power, and Amped Hardpoint is a capture-the-point gameplay type with added benefits for holding a point you’ve already got. Both of these game modes are quick and fun, and accessible to players of any skill level. Better players can go after difficult points or other players, while lower-skilled players can go after the AI (which has gotten an intelligence boost) or amp their team’s captured points for easy points. However, outside these two game modes, Titanfall 2’s multiplayer is sort of lacking. Capture the Flag is simply not very fun, Last Pilot/Titan Standing stops and starts every four seconds because of how little time it takes to kill people, and Bounty Hunt makes me feel like I should get an honorary credit for a calculus course just for trying to understand the rules. Additionally, the multiplayer “faction” system is pretty pointless, and it’s nigh impossible to stick together in a party between matches.

Any gripes I may have with the multiplayer system are easily alleviated by how good the campaign is. Titanfall 2 makes a vast improvement over its predecessor’s sad excuse for a campaign — a glorified series of multiplayer missions where half of the people playing were by default doomed to fail. This time around, we have a campaign proper, a series of actual, well-thought out, single-player levels with storytelling and excellent level design. The missions showcase a vast array of different mechanics and creative battles, but the number one standout in the entire game is the mission “Effect and Cause.” I can’t say anything about this level without spoiling it, but this mission alone is worth the price of admission. The storyline is pretty formulaic, but it works well thanks to some great voice acting from Critical Role’s Matthew Mercer (also Overwatch’s McCree) and a few bouts of clever writing.

Overall, Titanfall 2 makes a ton of improvements over the first game, which is why it’s so disappointing that it might be an economic failure. The multiplayer gameplay is fast-paced, smooth, and, most importantly, very fun, and the campaign is innovative and smartly designed. Both of these make massive leaps over the first game and make Titanfall 2 easily one of the best games in the genre. Also, grappling hooks.