Out of all the movies I’ve seen, Star Wars Episode IX is certainly one of them. I feel as though that’s probably the highest praise I can afford it — it’s a movie. It’s got a plot, it’s got some characters who do some things, there’s a score and some visual effects — it’s a movie. That’s more than I can probably say for The Last Jedi.

The Rise of Skywalker — whose title makes exactly zero sense until the final sixty seconds of the movie — feels a bit like the result of that game you played in drama class where everyone would say one word and try to form a cohesive sentence. Either that or the result of a game of Ultimate Chicken Horse. In 2015 Director JJ Abrams and writer Lawrence Kasdan (of Empire Strikes Back, Return of the Jedi, and Raiders of the Lost Ark fame) gave us what was, essentially, a soft reboot of the Star Wars series — but a serviceable one. It gave us interesting new characters, some satisfying story beats with our old favorites, and plenty of mysteries for its sequels to solve.

Then along came Rian Johnson, writer and director of The Last Jedi. Don’t get me wrong, Rian Johnson has made some phenomenal work. Not only did he write and direct the delightful murder mystery Knives Out, he directed Fly and Ozymandias, which I consider to be the two best episodes of Breaking Bad. By all accounts, Rian Johnson is capable of creating some amazing work. The Last Jedi isn’t it.

TLJ was a colossal mess, for lack of a better term. The plot accomplished nothing, the new characters were pointless at best and mind-numbingly irritating at worst, the established characters completely flipped the script on their personalities (Luke being a profoundly bad offender here), and ultimately Rian Johnson took all of the interesting mysteries Abrams and Kasdan established and said ‘never mind’ to all of them. Who are Rey’s parents? No one. Who’s this Snoke guy? Doesn’t matter, he’s dead. What will Luke do to train Rey and join the fight against the First Order? Pout and then die, mostly. How will Leia’s character be effectively sent off following the untimely death of Carrie Fisher? She, uh … won’t. Admiral Holdo and Rose Tico were infuriating characters who made increasingly questionable decisions, all of our main characters became frustratingly dense, and the plot made almost no progress beyond the meaningless deaths of Luke Skywalker and Supreme Leader Snoke. So Abrams, who wrote and directed The Rise of Skywalker, had a lot of things to contend with. Did he make a great movie in spite of this adversity? No. No, he did not.

Below this picture, spoilers abound. Skip to after the next picture to avoid them. 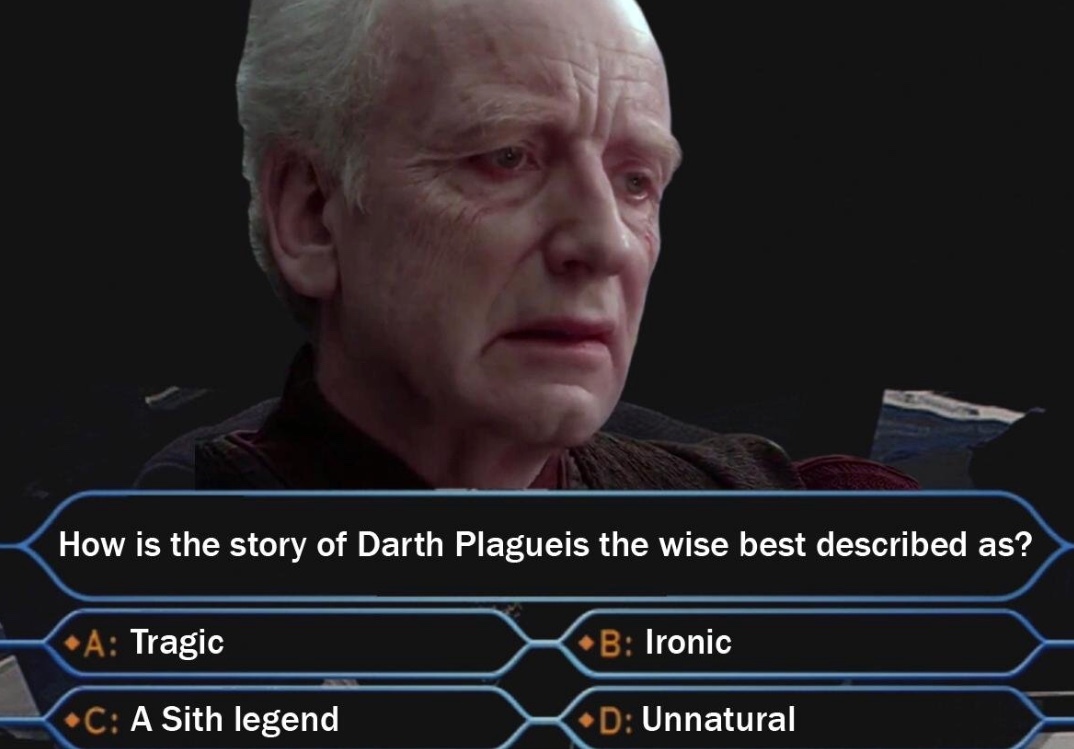 From literally word one, Episode IX is frustrating. Literally. The opening crawl references events that most likely all viewers have no concept of — Sith Emperor Sheev Palpatine returning from the grave and broadcasting a threatening message across the galaxy. If you had a difficult time remembering when in the Star Wars timeline that occurred, let me help you out — it happened in Fortnite. Yes, perhaps the most crucial element of the film’s plot is glossed over, and only expounded upon or even mentioned before this in an event in Fortnite. So, that’s neat. The rest of the movie is plagued by other issues just as egregious.

To start with, Leia Organa is handled incredibly poorly, to the point where it would’ve been better to have killed her off between films. She only has ‘scenes’ with Rey, and those are stilted and awkward. It’s abundantly clear that this is recycled footage (she uses the same voice clip of saying Rey’s name at least twice) to the point where I was reminded of the “my name is Judge” scene from Arrested Development every time she spoke. I understand the desire to pay tribute to the late Carrie Fisher, but the proper moment to do that would’ve been in the previous film, when they had plenty of places she could’ve died convincingly (being sucked into the vacuum of space instead of using the Force to fly like Superman, for instance).

C-3PO has been relegated to awkward comic relief for the bulk of the movie. He occupies the position decently enough, but it gets to the point where he’s making some joke in the background every thirty seconds and you just get exhausted thirty minutes in. He represents a similar issue to Korg in Thor Ragnarok, where he just kind of overstays his welcome. Similarly, Poe and Finn are basically completely different people to who they were in the last movie. Finn has, once again, a new semi-love interest, making his third in as many movies, and Poe just seems … anxious, the entire time. Luckily, there’s much more of them, unlike in The Last Jedi where Rian Johnson relegated Poe’s entire role to ‘getting told no by Admiral Holdo for unjustifiable reasons’.

Speaking of that, Abrams seemed completely unwilling to accept any of the decisions Rian Johnson made in the previous movie. While this is a laudable choice considering everything that happened in The Last Jedi was fervently stupid, it gives the movie a very disjointed, stilted feeling. The only real references to the last movie that I could identify were the character deaths and a few off-hand references to Crait and something called “The Holdo Maneuver” (which is immediately discounted as unlikely to succeed). Rose Tico is here, barely, and seems to be shoved into the backseat with Lupita Nyong’o’s Maz and whoever Dominic Monaghan was playing. While these characters are all meant to be coordinating with Leia, none of them ever speak to her at all; in fact, the only times she ever speaks in the base at all she very obviously removes herself from the area so there are fewer people to green screen in with her.

Moreover, Johnson’s defiant decisions about Rey’s parentage and Snoke’s presence as a leader are overturned once more, and it almost seems like several of the lines here are directed solely at him. Luke’s Force ghost catches Rey’s thrown lightsaber and tells her that it’s no way to treat a Jedi’s weapon (remember when he did that at the start of TLJ?). Kylo Ren informs Rey that yes, her parents were nobody, but her grandparents are another matter entirely. Palpatine similarly tells Ren that Snoke was entirely his machination in the first place. As such, we’re expected to believe that the grand mastermind this entire series has been him, despite zero evidence to suggest that existing prior to the Fortnite event. The idea of Rey potentially joining the Dark Side is recycled yet again, as is her awkward Force-Skype-call long distance relationship with Kylo Ren.

A lot of this movie just feels like fanfiction, to be completely frank. Palpatine is back from the dead, and even directly quotes several of his most-memed lines from the prequel trilogy verbatim. Rey is Palpatine’s granddaughter, somehow, and decides to change her name to Skywalker by the movie’s end. Kylo Ren experiences a heel-face turn akin to Darth Vader’s, albeit a much more unearned one. Rose is nonexistent. Finn is Force-sensitive. A fleet of Star Destroyers equipped with Death Star-esque planet-destroying lasers exists, but just … sits there. Chewie finally gets the medal he never got at the end of Episode IV (I was laughing out loud at that). We even get Lando Calrissian and hear flashes of the voices of Ewan McGregor, Alec Guinness, Frank Oz’s Yoda, and Hayden Christiansen, as though Abrams wanted to feature those characters but couldn’t completely commit.

As Abrams seems completely unwilling to acknowledge the existence of the previous film, he has to introduce his own concepts and see them come to fruition in the same movie. Did you know you could use the Force to heal others’ wounds? Kylo Ren will use that in his final act of self-sacrifice a la Anakin Skywalker in Return of the Jedi. Did you know that Leia trained to become a Jedi and had a lightsaber that she gave to Luke? Rey will use both in her climactic battle with Palpatine. Did you know that you can transfer objects over Force-Skype-call? Or that Force ghosts can interact with the corporeal world? Or that there’s a Sith language, and Threepio isn’t allowed to translate it? It reads like a bunch of nonsense in a similar way to Holdo blasting her ship through another ship to destroy it. Why couldn’t we do that with the Death Star? Or Starkiller Base? Whatever.

This movie feels like three movies squished into one, and it suffers greatly for its rushed plot. Kylo Ren and Rey’s arcs are difficult to believe, discovery upon discovery are heaped on us so fast it becomes impossible to parse what nonsense just happened before new nonsense is thrust in our faces. In sixty seconds, we see that Rey is strong enough with the Force to stop a spaceship from taking off, we learn that Rey can use Force lightning, we watch Chewie get killed in an explosion, and learn that he survived it after all. Similarly, Threepio heroically sacrifices his memory for the common good before getting it back an hour later. We meet an old flame of Poe’s and see that she hates him, but in the very next scene all tension between them is completely resolved. Rey’s climactic battle with Palpatine amounts to her holding two lightsabers for thirty seconds and him frying himself like in Revenge of the Sith. The deus ex machina of the final battle comes out of nowhere because the fact that Lando is going to get reinforcements is never really made explicit to begin with. Everything feels weightless, and the major character deaths are completely predictable. At one point a character literally announces “I’m the spy” after we learn that he’s the spy. It was kind of hysterical.

Despite all my gripes, I still think this is a better movie than The Last Jedi. To be clear — it’s not a good movie. But it’s at least a movie. The score is, as usual, brilliant (though the Imperial March is hugely overused, and the Star Wars theme appears at an awkward time). The visual effects are staggering and beautiful. Some of the new characters are effective, like Keri Russell’s Zori and Naomi Ackie’s Jannah, and it’s still great to see some of the classic actors in their old characters’ shoes again, despite how poorly most of them are handled.

It’s become increasingly clear over the course of this series that it should’ve been planned from the outset. The prequel trilogy was a mess, but at least it told a story and had a singular vision for what that story was going to be. The sequel trilogy was a jumbled mess of orphaned plot threads, contrived explanations and coincidences, and absurd decisions. It’s really a shame it went this way — I firmly believe that JJ Abrams or, frankly, even Rian Johnson could’ve done a passable job if they’d been given the reins over an entire trilogy. Instead we got a weird game of hot potato with neither one of them wanting to surrender their own disparate visions, and the result was a trilogy in which the third movie had to do the work of the other two and inevitably failed.

The Rise of Skywalker is a spectacular disaster. It looks and feels like a great sci-fi action movie, but makes so little sense otherwise that it’s almost surprising it even got made. I’ve been in Star Wars fatigue for the better part of three years, and sincerely hope the franchise is permanently put to bed, but I’m sure we’ll see more. Hopefully whoever helms the next set of films will learn from the mistakes of their predecessors.